History:
At a Synod in 519 St David was chosen to be the chief Bishop of Wales. It is said that St David made a missionary journey down the Irfon valley founding seven churches on its south bank. These are listed as Llandewi in Abergwesyn, Llandewi wrth y rhyd, (Llandewi by the ford, Llanwrtyd),Llandewi in Tirabad, Llandewi at Llwyn y Fynwent, Llandewi in Llanynis, Llandewi in Maesmynis and Llandewi'r Cwm on the ridge between the Irfon Valley and the Wye.
The Strata Florida monastery was given most of the local area in 1164 by Lord Rhys, Prince of Powys. This included Llanwrtyd, part of Llangammarch, Llandeilo'r Fan and Tirabad.
In 1536 the land passed into ownership of the Crown. It was given to Edward Wymark and the area eventually passed to Sir Sackville Gwynne of Glanbrân who built the  present church in 1716.
The Church was built as a 'burial church' and many of his descendants' graves are situated in the small graveyard.
In 1820 the  porch was built,(now sadly removed ) the doorway in the north side of the building having been closed up at some time. The windows were restored by Lord St.David whose family built the Manor above the village before the First World War as a shooting lodge.
Censuses show that in the 1800s there were 24 farms and nearly 130 people living in the area.When the Army took over the range on the Epynt, the poulation was cleared.
The church began to fall into disrepair and the porch was removed. In 2011 there was an urgent appeal to raise funds to restore an historic parish church as an architectural survey on St David’s church revealed serious decay in parts of the building.
Sadly, repairs were not done and the church was eventually closed. in 2019 The Representative Body for the Church IN Wales began the paperwork to sell the church. we are hopeful that the Sackville-Gwynne family might be able to purchase it as memorials to the Sackville-Gwynne family remain inside. 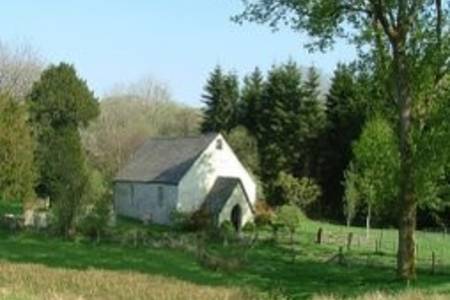 If you have any memories, knowledge or images of St David's Tirabad which you would like to share with us then please click on the button below and fill out the form.